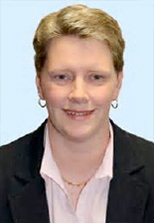 Jenny Bush joined Cummins in 1997. Prior to her current role as President – Gulf Region, Cummins Sales and Service, she served as General Manager for the Commercial Marine Business where she grew the commercial marine business over 12% in 2012-2014.

Jenny completed a technical apprenticeship with Shell Oil and is also qualified in both mechanical engineering and business with degrees from the Wirral Metropolitan College and Leicester University, both situated in the UK. She is also a certified Black Belt and completed seven projects in 16 months with over $15M of savings to Cummins. Although extremely dedicated to her work, Jenny has clear priorities about spending time with her family. Jenny and her husband Derren, also a Cummins employee, have two children, Sam (13) and Katie (8). “They are my greatest achievement in life. Seeing them grow up and being a part of helping them develop is incredibly inspiring to me.”[/three_fourth]

Jenny is an avid soccer and rugby fan, and a self-proclaimed adrenalin junkie. Other activities she enjoys include scuba diving, sky diving, playing rugby and tennis.