A change of plans leads to adoption

Plans can change in a variety of ways. That was the case for Amy Abbott.

Amy was looking for an opportunity to give back to the community, and she found that in fostering. “She wanted to reach young kids who needed assistance… she never saw herself full-on adopting,” Youth Villages Foster Care Regional Supervisor Martonyia Webb said.

However, what began as just an interest in foster care turned to adoption when she met and developed a relationship with Aaron, who was living on a Youth Villages residential campus.

Facing neglect, Aaron had to be an adult

Aaron, 12, was a few months before beginning his teenage years. Yet, there he was in his parents’ home having adult responsibilities placed on him before he was ready. He had to clean the house himself. He had to change the younger kids’ diapers. Aaron was doing things he shouldn’t have.

“The living environment wasn’t good because I had too many parental responsibilities.” Aaron said. “The house was dirty.”

His mother had mental health issues that greatly impaired her supervision over the kids and the home—which was eventually condemned. Because of that, Aaron was placed in charge of looking after younger children, and that trauma led to some inappropriate behavior.

The Department of Child Services took the kids out of the home, and Aaron was placed on a residential campus to receive counseling.

“When first got to Dogwood, I wanted to go back to my family, which now I see, would not have been a good idea,” Aaron said. “My therapist saw that I was a great kid and was trying to find me a placement. I had to stay at Dogwood until a foster family could be found.”

It was while Aaron was at Dogwood that Amy saw his profile. She began visiting Aaron virtually and on campus. During her visits, Amy and Aaron played games and did other activities. Aaron moved into her home as a foster youth in August 2021, and although the relationship was growing, Amy’s focus was still on fostering. 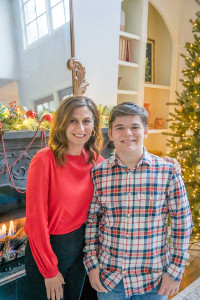 “I came into foster care to help families with reunification,” Amy said. “That was my sole purpose—to give parents a temporary break to get back on track and to give kids stability, to build relationships with the parents and Youth Villages, and to get the kids back to their biological families.”

For Aaron, going back to his family wasn’t going to happen. Reuniting with his mother was not an option.

Aaron also recognized he was thriving in his foster home. His grades in school improved. He got involved in school activities.

Aaron’s flourished so much since he’s been with her. You can see the joy on his face.

In December 2021, Amy began inquiring about adopting Aaron. However, a hurdle that she had no control over remained. Her husband was suffering from a terminal neurological disease and couldn’t consent to adopt. In Tennessee, the law requires both parents to consent to legally adopt.

Sadly, her husband passed away in the summer of 2022, but Amy saw it as a door that opened to adopt Aaron.

“Everything kind of fell into place,” Amy said. “Aaron seamlessly fits into our family.”

Aaron’s adoption day was Oct. 11, 2022. For both he and Amy, the time spent with Youth Villages could not have been better.

“We’ve had a positive experience,” Amy said. “Everyone was extremely helpful.”