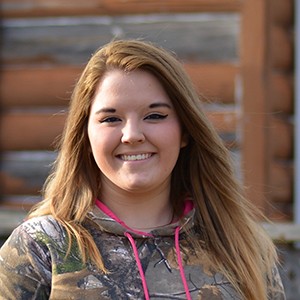 Kaitlin, 16, missed more than 40 days of school last year. She was attending an alternative school after being arrested and expelled for theft. She was on probation with a strict curfew.

“My grandmother and I couldn’t have a conversation without yelling,” Kaitlin said. “I was heavy into drugs and disobeying her rules. That’s when we started Youth Villages’ Intercept program for the first time.”

Ali Coughlin was Kaitlin’s Youth Villages family intervention specialist. After weeks of refusing to utter a word to Ali, Kaitlin decided to open up about her past. She told Ali about her parents’ drug abuse and how they gave her up when she was born.

“My mom came in and out of my life, but it was never for a good reason,” Kaitlin said. “Whenever I was with her, there were drugs around.”

Kaitlin wished for a relationship with her parents. That’s why she got into drugs. It was the only way she knew how to connect with them.

“Walking through my trauma narrative with Ali was one of the most helpful experiences I’ve ever had,” Kaitlin said. “I was honest with my feelings and discovered the roots of my issues. But my behavior was still out of control.”

Kaitlin’s social life was holding her back. She continued to fail drug tests and break her probation curfew until she was sent to a residential treatment facility for six months.

“Being gone for that long gave me a brand new mindset,” Kaitlin said. “My grandma drove two hours twice a week to visit me while other kids didn’t have any family at all. It made me appreciate how much I had waiting for me at home.”

Kaitlin returned home to her grandmother, Alice. They reentered the Intercept program with Shannon Geenty as their Youth Villages specialist. She helped Kaitlin transition back into the home as they worked on communication skills, regulating emotions, and relationship building.

“Kaitlin and Alice used to fight every morning when Kaitlin couldn’t get out of bed for school,” Shannon said. “Instead of yelling and acting defensive, we took the time to sit down and problem solve.”

Kaitlin suggested turning her phone off at an earlier time each night to get to sleep faster. Alice practiced her patience and speaking in a calm tone. Mornings are much less stressful.

“Their team work has paid off,” Shannon said. “Alice has become more empathetic and Kaitlin more respectful. Their mutual appreciation and admiration for each other is undeniable.”

Kaitlin seeks positive peers at school as part of her relapse prevention plan. Her attendance and grades have improved. After scoring well on the practice ACT, she received a letter from the University of Memphis celebrating her potential as a college candidate.

“Everyone used to tell me I would be just like my parents,” Kaitlin said. “It’s a good feeling to be proving them wrong. Thanks to my grandmother and Shannon’s support, I am so excited about my future.”