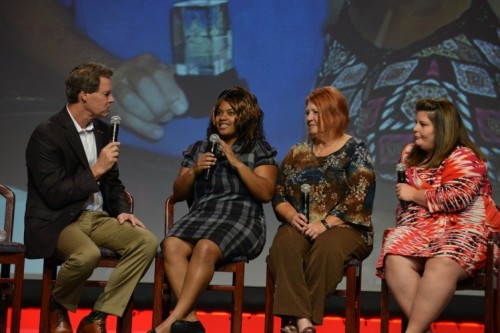 Growing up, Kiera and her siblings were often caught in the middle of their parents’ violent fights.

Kiera vividly remembers driving in a car with her parents when a fight broke out between them and her mother started hitting her father. It was one of many of her parents’ physical altercations the children witnessed on a regular basis.

Her parents kept trying to live together. But it never worked out. There were always arguments, and they always escalated.

When Kiera was in high school, one fight went too far. The police were called, and the family lost their home.

Kiera turned 16 in a homeless shelter. She, her mother and little brother lived there for almost a year. The three shared one small room, and Kiera did her homework in the day room, wearing earphones to shut out the noise.

“No one at school really knew that I was at the Salvation Army,” she said. “I didn’t tell anyone. But there were things I couldn’t do. Like have a sleepover. I really didn’t have a home.”

Like many of our young people, Kiera found school to be her refuge from the chaos of her family life.

“I dived into school and did my best,” she said. “I put on that front that everything was OK. The teachers knew, the vice principle.”

She took a class in food and nutrition, and discovered that she loved cooking. Because of the family dysfunction, she had never had the experience of cooking with mom or grandmother in a kitchen at home.

She found she loved cooking from scratch — and participating in the class’ Iron Chef competition.

Carolyn Ordal, then working with a nonprofit group that provided tutoring and job support at West High School in Knoxville, noticed Kiera’s determination to succeed. Kiera never missed a session and graduated as a member of the National Honor Society. When Ordal went to work for Youth Villages’ YVLifeSet program, an intensive community-based program to provide guidance and support to young adults aging out of state care or who lack family support to help them make a successful transition into independent adulthood, she thought it would be the perfect fit for Kiera. She contacted her and recommended the program. Ready to accept any support offered, Kiera applied to enroll in the program.

Green began working one-on-one with Kiera on a weekly basis to help her identify her independent living goals. Then, Green and Kiera made a plan of the steps Kiera would need to take to make her goals a reality.

Green helped Kiera work on budgeting, managing bills and handling finances. She helped Kiera save money for her own apartment and budget to pay off her car. Green also worked with Kiera on finding her first apartment, signing a lease and helping her manage her time to excel in school. She was there to support Kiera as she made important decisions regarding her future career.

Green and Ordal also helped her apply for and receive an opportunity to study abroad in Taiwan, where Kiera was especially excited to learn cooking a different cuisine and trying foods she had never heard of or if she had, considered actually trying them.

Kiera recently finished community college in culinary business and completed a culinary internship at DisneyWorld. When Youth Villages held its 20th Annual Employee Conference in Memphis in early November, Kiera was invited as a YVLifeSet participant to speak to Youth Villages employees about her experience in the program. She also participated in a YVLifeSet participant youth panel to give YVLifeSet specialists tips on how to best get young people engaged in the program and communicate with them.

As a bonus, she had the chance to meet conference guest speaker Chef Jeff Henderson, host of the Food Network’s “Flip My Food” show who built a career as an award-winning chef and best-selling author after learning to cook while in prison for drug-related charges. Chef Jeff took time to counsel Kiera on her culinary career and provided her with tips on how to build her resume and use networking to her advantage. He also spent some time with Kiera in the Memphis Cook Convention Center’s kitchen, where Kiera helped put a barbecue dry rub on a pork shoulder and learned how to best cook barbecue pork in the oven – at 220 degrees for 12 hours – to make it fork tender.

“Chef Jeff was extremely nice,” Kiera said. “At the end, he gave me his email address, so I could get in touch if needed. It was amazing.”

Kiera works at a bakery in Knoxville, where’s she’s the lead froster and will be starting her junior year in business at Lincoln Memorial University in January. She hopes to one day own her own business.

“I call them my Knoxville family – Ms. Shirley and Ms. Carolyn and others who have helped me over the years,” Kiera said. “They really have become my family. They’re so supportive, and I know I can call on them any time I need anything. They’re just like family.”