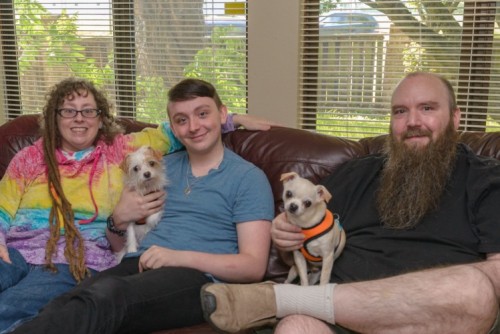 Noah was unhappy at home and at school. He attended an alternative high school for youth with emotional problems and was ready to run away from his parents.

“There was a lot of family conflict to overcome,” said AJ Hoeflinger, Youth Villages family intervention specialist. “Noah had suicidal thoughts and self-harming behavior. His parents were depressed themselves and didn’t know how to help.”

Earle, Noah’s father, raised him with an authoritative parenting style. At times, he became aggressive with his words and actions.

“When Noah was defiant, I had a bad habit of raising my voice and responding with anger,” Earl said. “I was trying to gain control of the situation, but it only made things worse.”

“Earle and Kristine were anxious about Noah returning because they didn’t know what to expect,” AJ said. “But once we began family therapy, everyone gained confidence and became fully engaged. The whole family was committed.”

AJ’s priority was to help the family communicate and regulate their emotions. Both Noah and Earle learned the importance of taking time to step aside and calm down when emotions escalate.

“Collaborative Problem Solving helped us resolve disagreements without inflicting grief or guilt upon one another,” Earle said. “We have learned to respect each other’s feelings and work as a team.”

Noah is more open with his parents now that he feels their support at home. AJ introduced Noah, Earle, and Kristine to a psychiatrist to help manage Noah’s mental health. He has been stable for months and his parents have found a therapist of their own.

“We have a new goal in our home to never end a discussion with a frown,” Earle said. “AJ taught us a lot and we are trying our best to practice our new skills.”

Noah’s parents receive positive reports from his teachers. His grades are improving and he no longer causes trouble. He is looking forward to transferring from the alternative school to his local public high school next year.

“We are forever grateful for AJ and the support Youth Villages has provided for our family,” Kristine said. “This program has impacted our lives tremendously. We will never forget this experience.”