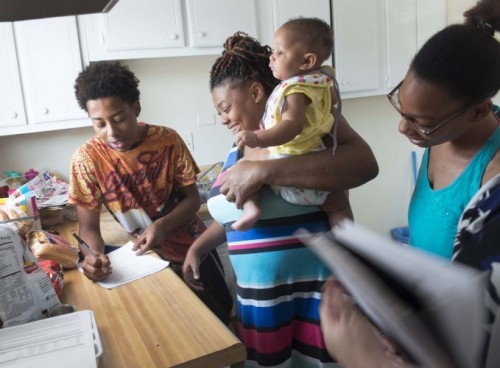 His mom thought Neko had been smoking marijuana again.

Doing drugs was part of a slew of problems that had gotten him sent to a Tennessee youth detention center, for six months. Now that he was home, Neko and his mother and two sisters were trying to communicate better. The stakes were high: While Neko was in detention, his baby daughter had been born, and he and his family had primary custody of her.

He’d left their sparsely furnished apartment near the airport in Memphis the night before, even though his mother had expressly forbidden it. He wouldn’t say where he was going.

The next day, standing around the apartment kitchen, Neko, his mom, and his sister talked about what had happened. Or at least they tried.

Mom, her arms folded across her chest and a scowl on her face, was clearly still angry about being disobeyed. And maybe frightened about what could have happened the night before to her 16-year-old son.

Also in the kitchen was Tina Brown, a family intervention specialist with Youth Villages, a nationwide nonprofit dedicated to helping emotionally troubled children and their families. She’d been seeing Neko and his family three times a week since he came home. She brought with her a powerful new tool that’s also a revolutionary way of approaching troubled kids and the conflict they bring to their lives and their families.

It’s called Collaborative Problem Solving, or CPS, and the evidence-based intervention is part of a sweeping rethinking on the part of Youth Villages about what really makes kids act out, get into trouble with alcohol, drugs or sex, or even turn to violence or suicide. Youth Villages has already added CPS to the evidence-based interventions used in its programs in Oregon, Massachusetts, Indiana, Oklahoma, Mississippi and parts of Tennessee. Eventually, the treatment method will spread throughout the organization, which helps more than 22,000 children each year from 20 states and Washington, D.C.