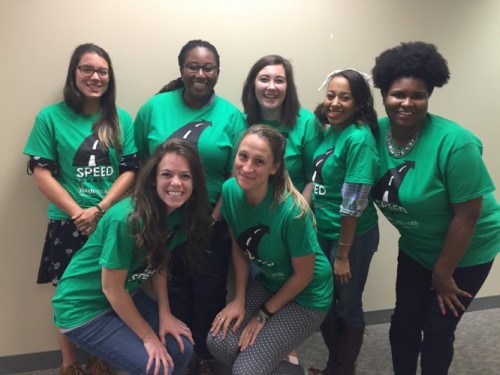 As an organization that prides itself on professionally developing its employees, Youth Villages recently promoted nine North Carolina counselors.

Moving into leadership roles, these candidates first completed a 13-week program known as SPEED.Designed and delivered by Program Management Consultants Troy Ciocchetti and Charity Houghton, SPEED stands for Supervisor Preparation, Education, Exploration and Development.The course gave participants exposure with all facets of the supervisory role and prepared them to take the leadership challenge.

“North Carolina has had some really amazing growth opportunities that expanded programs, which added new leadership positions to be filled,” Houghton said. “They needed a program that would get people ready to take on the new roles.”

Houghton and Ciocchetti worked with state leadership staff to ensure the curriculum matched the expectations and competencies of their supervisor positions.Throughout the 13 weeks, participants engaged in weekly phone calls, and completed pre-and-post-call assignments. They also participated in two face-to-face trainings, and worked with their supervisors during their individual development meetings to apply what they’ve learned in a real-time setting.

They often took on supervisory tasks, such as leading group supervision or completing supervisor tracking reports. Lastly, they completed a program project, which was to solve an issue prevalent statewide, and then presented it to the North Carolina leadership team.

Brittany Williams, Greensboro MST clinical supervisor, described the SPEED program as eye-opening and helpful.“I was able to learn a lot about the behind the scenes processes that take place that counselors don’t see,” she recalled. “It made me appreciate the leadership staff, more particularly the supervisor role, as the supervisor serves as the middle man between our front line staff and the rest of the leadership staff.”

After SPEED, Williams was determined to immediately utilize the topics she learned within the course, which moved her ahead of the learning curve once she transitioned into her new role.“I began using the tools, such as the supervisor tracker and assisting my then supervisor with preparation for group and consult, or even developing my own counselor development plan to get in the habit of writing them.”

She added how grateful she was to have access to courses, such as SPEED.“I love the fact that Youth Villages is continuously offering trainings that will help us grow,” she said. “Once I had the green light to sign up for those classes, I didn’t hesitate to jump at that opportunity.”

Consequently, SPEED helped Williams prepare for her supervisor interview.“My confidence was through the roof because of all the knowledge I had consumed about the supervisor role,” she acknowledged. “I also felt that my feedback to interview questions was more thorough and accurate, and I could attest that through that experience in the SPEED program, I wholeheartedly felt like the best candidate at that time.

”SPEED participant Jennifer Deaton, of Charlotte, recently moved from an MST role into her current position as YVLifeSet placement specialist and assessor.“The experience I had in the SPEED program, not only helped me learn about the supervisor role and responsibilities, but allowed me to gain skills in developing my leadership,” she said. “During the program weeks, it was refreshing to share and be challenged by like-minded peers each week that made me want to not only be ready for the next level but get better in my current position.”