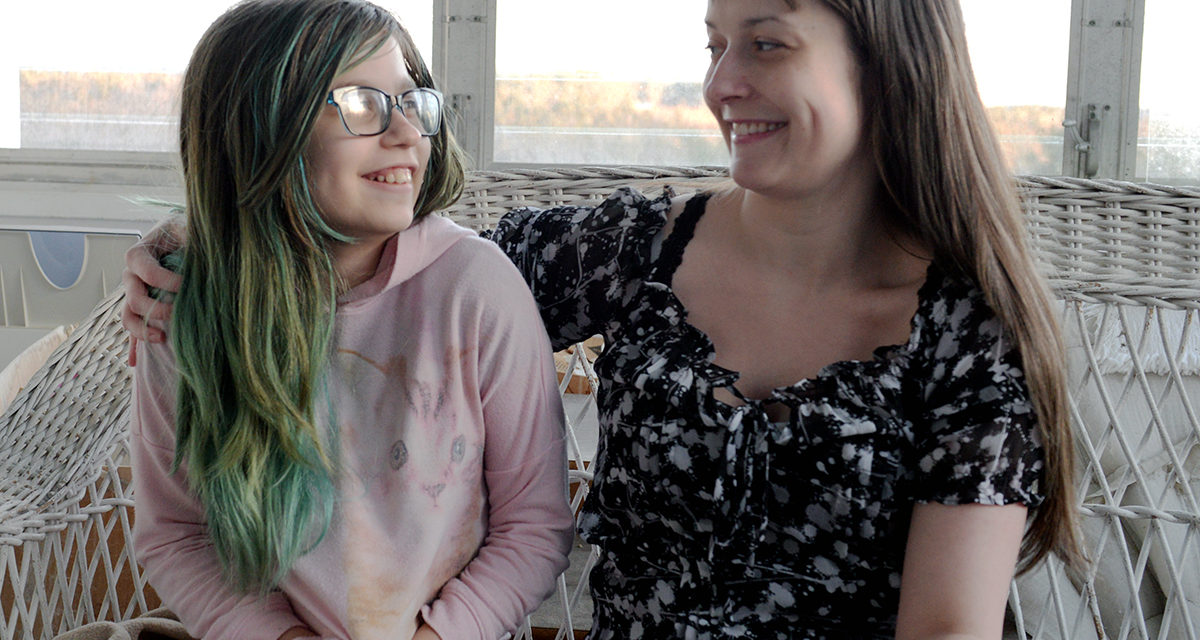 Step by step, Youth Villages helps Sawyer and her mom overcome her refusal to go to school

The anxiety of going to school caused Sawyer, a seventh-grader, to have migraines and become sick. Even when she was not ill, she refused to go, causing truancy issues and arguments with her mother, Maecee, who says she was at her wit’s end. The problem became so difficult, the Massachusetts Division of Youth, Children and Families (DYCF) called in Youth Villages to help.

Now, with skills learned through a brief time in Youth Villages’ YVIntercept program, Sawyer and her mom say getting to school is a matter of increments. Sawyer can work on each assignment without panicking about the bigger, looming progress report grade.

“I put one foot in front of the other each morning,” Sawyer said. From her bedroom, to the doorway of her home, and to the entrance of her middle school.

Sawyer experienced a period of truancy when she was younger. In third grade, she contracted mononucleosis and was out for a lengthy time. She recovered physically but her concern about the large amount of missed schoolwork caused her to dread and resist going back to the classroom.

Maecee, a single mom, remembers, “We met with Sawyer’s teacher, the school nurse, the school counselor and came up with a system of rewards that worked. Sawyer went back and did well. She is a smart girl who applies herself.”

Sawyer excelled the following years. She handled the transition from elementary to middle school with excitement and got good grades. But then, a few months toward the end of sixth grade in the spring of 2017, her mom began to notice signs of hesitance again.

“I asked if there was bullying, a problem with social media, an issue with teachers, with the classes, but none of them was a red flag,” Maecee said. “This may sound really stupid, because I’m the adult here. But I could not get my kid to go to school. I never gave her the proverbial ‘kick in the ass,’ but the mental stress and arguments every morning caused me to become exhausted, so I just gave up.”

YVIntercept is an intensive trauma-informed, in-home service designed to help strengthen families with children from birth through 18 years old who face behavioral and mental health challenges. Family intervention specialists work closely with the child and family in their home, community and school. The specialist is the family’s partner in learning skills, overcoming obstacles and attaining goals so the family can live together successfully.

Mia from Youth Villages began working with Sawyer, Maecee and school personnel over the summer break. Using this interim period – when stress was not a factor – Mia introduced the Collaborative Problem Solving approach to the family.

CPS was developed by Think:Kids, a program of Massachusetts General Hospital Department of Psychiatry. It is based on the belief that kids do well if they can. When they face a challenging situation, it’s their lack of skills that causes them to become frustrated and act out. In CPS, caregivers and children work together to solve problems in mutually satisfactory and realistic ways. Over time, it helps solve problems that are creating challenging behavior while building relationships, trust, thinking skills, intrinsic motivation and confidence.

Using CPS skills, Sawyer was better able to communicate the source of her anxiety. Maecee was able to pause, listen and understand these concerns, and develop plans to address them.

Sawyer said her anxiety stemmed from completing work in a timely manner for the closing of grading periods. As school terms drew to an end, she froze – unable to see the incremental steps to completing assignments because her thoughts of progress reports and final grades overwhelmed her. Once she fell behind in assignments, the fears grew worse.

Working with Mia and the CPS approach, Sawyer and Maecee began preparing during the summer for the start of the new school year. They strategized a new structure to Sawyer’s routine. She went to bed earlier, got up earlier and, when the school year began, scheduled time for homework. Also, they negotiated limits of screen time on Sawyer’s smartphone; Sawyer likes to watch videos to relax but the habit was eating up too much time.

The plan was working. From September through October, Sawyer did not miss a day of school. But then, Sawyer started slipping again. This time, Maecee had skills to address the problem without outside help.

“If Sawyer hesitates about going to school, we take it one step at a time,” Maecee said. “First, I determine, is she is truly ill, is there a temperature or is she getting sick? If not, then it’s time to talk it through, take steps and set goals.”

They negotiated this objective. If Sawyer goes to school for nine weeks without missing a day – other than being sick or an official snow day – and she comes home with a progress report with As and Bs, she can pick a small animal as a pet. Their house is already home to several dogs, cats and little creatures, such as sugar gliders – a small, flying, possum-like marsupial from Australia which mother and daughter proudly show to visitors.

Sawyer is back on track and thinking of her future. She plans to become a midwife or a teacher, as she enjoys being around young children. But for now, she knows the plan begins each morning with that first footstep out of bed, and then one after another to the entrance of her school.