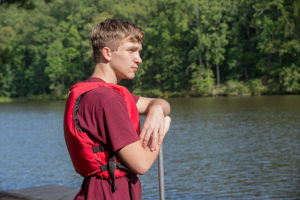 Tommy, 16, was brought to Youth Villages-Inner Harbour campus by his mother. But he didn’t see it coming.

“When my mom and I pulled up to the campus, I had no clue what was going on,” Tommy said. “I didn’t even know what Youth Villages was.”

Tommy’s mother had a reason for not warning her

son that she was taking him to residential treatment. She was afraid of how Tommy would react.

“When Tommy first came to us here at Inner Harbour, he was extremely volatile,” said Haley Gresham, Youth Villages family intervention specialist. “He was verbally aggressive and never thought twice before lashing out.”

Before Youth Villages, Tommy’s home life was chaos. He did not follow household rules and often lied to his parents. Arguments escalated quickly, feelings were hurt, and communication was lacking.

“Honestly, I was relieved when I got to YV because I hated being at home,” Tommy said. “We couldn’t even sit at the dinner table together without fighting. My family was falling apart because of my actions.”

During Tommy’s time at Inner Harbour, he and his parents attended family therapy on a regular basis. With Gresham’s support, they practiced communication skills and worked together to build stronger and more positive relationship.

“This family did an incredible job working together,” she said. “Week after week they were honest with each other and willing to work through issues and resentment. They were determined to make real progress.”

Gresham also met with Tommy individually, where she helped him learn to identify his difficult feelings, slow down his thoughts, and consider the consequences of his actions. Instead of reacting out of impulse and aggression, Tommy began to use positive coping skills like creative writing, coloring, and singing.

“I experienced a turning point when I first realized that my actions can hurt other people,” Tommy said. “Before, I only thought about myself. Now, I think through my decisions. I don’t want to cause any more pain.”

Thanks to the support of his family, Gresham, and Youth Villages, Tommy has learned to manage his difficult emotions and consider the perspectives of others. He has learned to communicate with his family and he looks forward to their reunion.

“I feel ready to go back because I know things will be better now,” Tommy said. “I will never forget what I’ve learned during my time at Youth Villages.”

“I couldn’t be more proud of Tommy’s hard work,” Gresham said. “He is smart and willing to improve himself for others. I am confident that he is going to go on to do great things.”