Mary Lee uses her experience, legal degree to focus on helping the 23,000 young people who age out of foster care every year without family support. 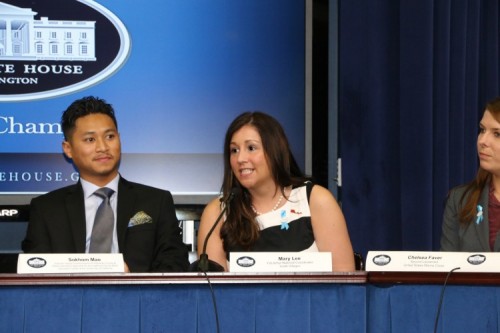 Mary Lee on the Champions of Change in Foster Care panel at the White House in 2015. 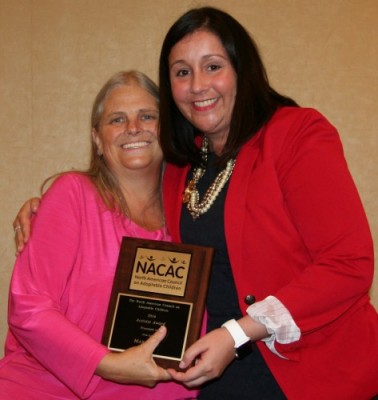 Mary Lee may have recently received the 2016 Activist Award from the North American Council on Adoptable Children, but her work to impact the foster care system at both a state and national level is 20 years in the making.

The NACAC honored Lee, assistant director of strategic partnerships at Youth Villages, during its annual conference on Aug. 6. The event recognized special individuals, groups and organizations that have devoted their time to promoting adoption and improving child welfare.

“The activist awards honor individuals whose work has had a significant positive impact on children and families in their community or region,” said NACAC Executive Director Mary Boo.

Lee, a graduate of the University of Memphis Cecil C. Humphreys School of Law, has aided

the passage and implementation of legislation, such as the John H. Chafee Foster Care Independence Program, the Fostering Adoption to Further Student Achievement Act and the Fostering Connections to Success Act.

“I’ve been working in child welfare since I was 15,” Lee acknowledged. “That’s when I got involved in advocacy and learned that my experience could help transitioning youth.”

Lee went into foster care when she was around 12 years old, and by 15 she had already begun to champion for a better system by sitting on youth boards, educating legislators and leading case manager and foster parent/adoptive parent trainings.

“I feel so incredibly thankful for having the childhood experience I did; even though it was challenging and difficult in the moment, I have a purpose in my life,” she said. “My works allows me to help others and have the impact I dreamed of as a child.”

Despite her early legislative dealings, Lee, at one point, planned to become a doctor, getting drawn toward social work well into her time at Austin Peay University.

“It was my third year of college when I changed to social work,” she recalled. “Because of the legislative work and advocacy, I knew I could use my personal experience to benefit others.”

After undergrad, Lee chose to pursue law after spending a semester at Vanderbilt Institute for Public Policy.

“There I got to see the interworking of government relations and how to use data to drive a goal forward,” she explained. “It made me realize I could make an impact on a macro level that would lead to system reform instead of working with individual children and families.”

Lee launched her Youth Villages career while she was still in law school in 2006, beginning as a summer intern that led to a part-time position in the human resources department. She has since filled various roles and was one of three people to establish the YV Scholars program, which helps young adults in the YVLifeSet program with their educational goals.

“I think working at Youth Villages has been a natural fit for me,” she noted. “They’re aligned with the same values as I have in helping others. They not only focus on good services, but also system transformation, which I’m passionate about.”

Among her many accomplishments, Lee is particularly proud of the Fostering Adoption to Further Student Achievement Act, which was nicknamed after her.

When a forever family chose to adopt Lee at the age of 17, her adoption worker explained that with college nearing she may want to wait until she was 18 to be adopted to keep from being a financial burden on her adoptive parents.

“I was so frustrated that they would tell a child to choose between a forever family and an education, because both of those are fundamental to be a successful adult,” she said.

Lee shared her story at a Capitol Hill briefing, where a legislative staff member heard it and took it back to their senator who drafted and introduced legislation as an amendment to the Higher Education Opportunity Act of 2008 that would ensure Lee’s experience did not happen to another child.

“I got the phone call that it had been signed into law by the president,” Lee remembered. “I immediately called my parents and thanked them not just for changing my life, but for changing the lives of so many other foster youth.”