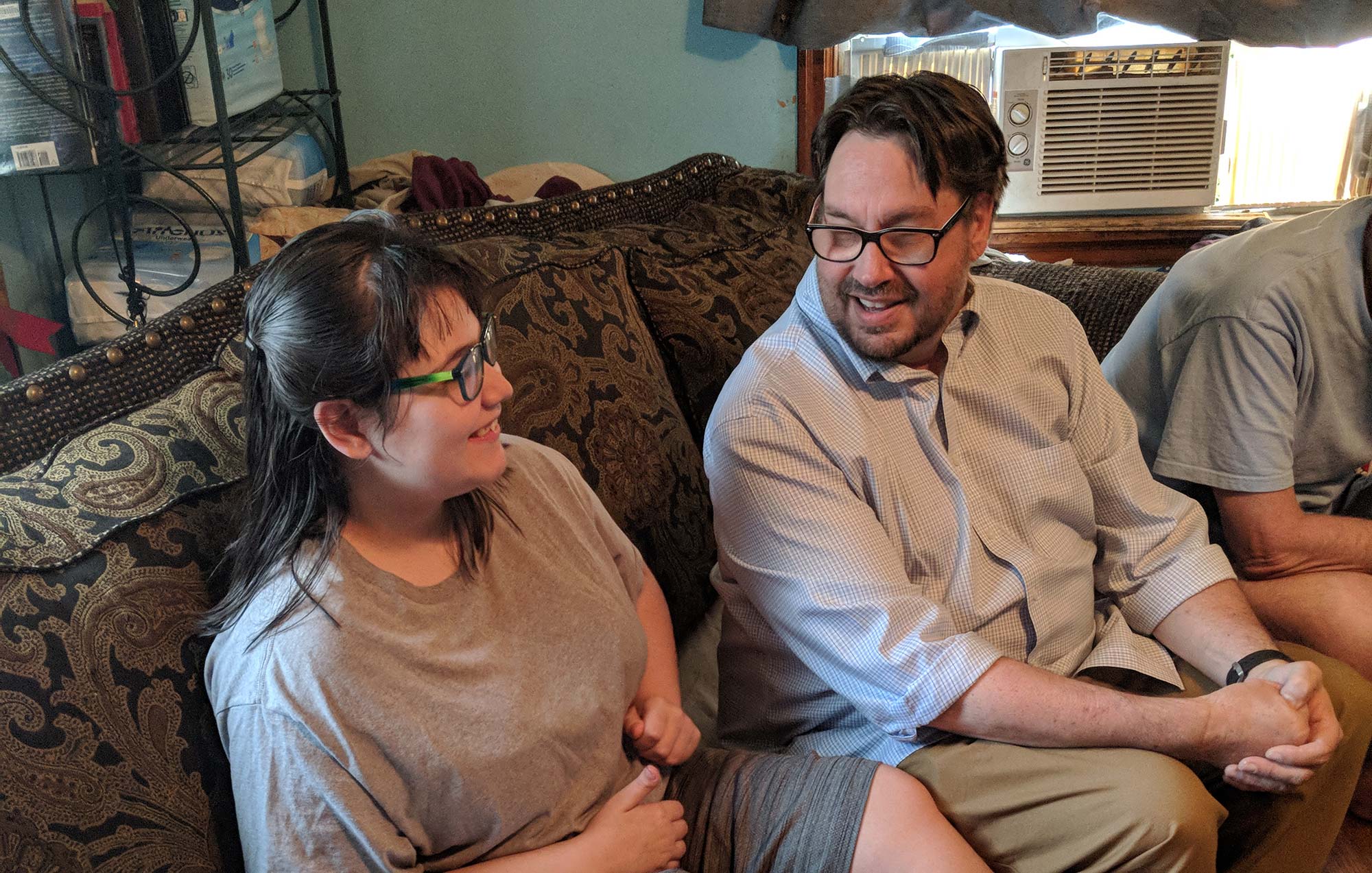 Sasha, 15, and her younger siblings had been in the Laura Dester Shelter for three months when counselors from Youth Villages working with the Department of Human Services met them. The team was looking for children who could be reunited safely with their families, as DHS worked to close the shelter and move children home or to more appropriate settings.

“The three children were all on the autism spectrum and mostly nonverbal,” said Calvin Fidler, a specialist with the Youth Villages YVIntercept program. “They were placed in the shelter with no notice, and separation from their parents had been hard on them.”

“We felt that clinically, these children could move back home safely,” he said. “The children’s parents, David and Janet, were very dedicated and caring. They had been walking six miles to the shelter at least twice each week to see their children.”

The children were taken into custody after mom had an outburst related to a mental health condition, and police were called. Now, there were no issues at home, and DHS was ready to reunify the family with intensive support from Youth Villages.

Separation had been traumatic for everyone. The children were frightened and confused at the shelter and didn’t understand why they couldn’t go home. Sometimes, they acted out aggressively with staff. Their parents believed the children shouldn’t have been taken out of the home and were upset that they had been away so long.

When Calvin first met the parents, they were unsure about him and what he could do.

“At first, we didn’t trust anybody,” Janet said. “We learned that Calvin was on our side, and he was our advocate.”

The children went home almost immediately, but they showed the impact of the traumatic separation.

“They were not sure that they were staying,” Janet said. “We would take them places and come home. So they knew that anytime they went somewhere, they would be coming home again. At night, they would all sleep, huddled together. They had been separated at the shelter.”

Calvin met with the parents and children three times each week for family therapy and was available 24/7 to come to the home if needed. The Youth Villages approach is strength-based, looks for drivers of issues and addresses them with evidence-based interventions based on each need. Another agency helped with case management, and DHS was very involved.

“Young people see the growth, see the positive changes in their lives and that makes them want to do more”

“We worked on managing the parents’ chronic stress that comes from caring for children with serious disabilities, understanding their diagnoses, and how to work with them at home and in the community,” Calvin said.

A few months after the children came home, the family faced another threat to their stability. David went into the hospital for a gallbladder issue and developed a series of serious complications.

“He was in the hospital for six months, making mom the single caregiver for the children,” Calvin said. “During that time, we gave her more support, particularly around managing her stress and understanding how to deal with medical systems. She also had incredible support from family and friends and did a wonderful job with the children.”

Calvin helped the parents begin to use American Sign Language, which was being taught to the children at school so they could communicate more easily with caregivers. Developing consistency between the home and school helped them learn more quickly.

From the very beginning, DHS provided support for Youth Villages and the family.

“Melissa Lucas, the family services worker, and Rosie Kitchen, her direct supervisor, were very involved and invested in reuniting this family,” Calvin said.

DHS, Youth Villages and the Still She Rises legal group helped the parents resolve legal issues while keeping the children in their custody.

“Janet and David continue to be successful, providing their children with stability, safety and the security of their family,” Calvin said. “During a court review, Juvenile Court Judge Rodney Sparkman praised the family and the involved agencies for the pronounced progress the family continues to make.”

For the family, things are so much better than before. They were able to get a car, and Dad soon may be able to go back to his job as a cook. The children are happy at home.

“We are grateful that Youth Villages found them in the shelter,” Janet said. “Without them, I don’t know if anyone would have noticed. They helped enormously.”