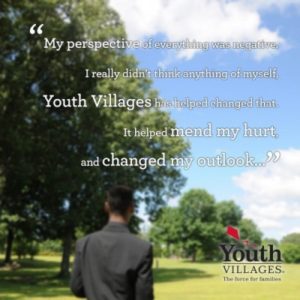 Adrian was born in prison and his childhood was a nightmare of abuse.

He thought his life would never get better, and the only way to end his suffering was to commit suicide. Finally, he came to Youth Villages for help in one of the intensive residential centers.

“When I came here I just wanted to die,” Adrian said. “It just wasn’t worth living anymore.”

At Youth Villages, Adrian found a strong support system, people who helped him realize his life is important, and that it is possible to live a normal life.

Counselor Chanel Townsend helped him overcome one of his biggest hurdles. She helped him reconnect with his parents, who he thought he would never to speak to again.

“I felt really hurt, and not cared about at home, and I did not want to see my family ever again,” Adrian said. “It took me a minute, but Ms. Chanel really helped me through it.”

Townsend helped him look at things from his parents’ perspective, and helped him analyze events that had happened in his life.

“I could have never imagined talking to my mother again, because that is something I vowed I would never do,” Adrian said. “I didn’t want to see her, or have sessions with her, but Ms. Chanel eased me into it.”

Counselors at Youth Villages helped him settle in, and feel more at ease with being on campus.

“It’s hard being away from home, but Ms. Tasha gives me the feeling of not being alone,” Adrian said. “That was one of the biggest things I had to learn, but they help you to not think about it like that.”

Youth Villages changed Adrian’s outlook on life and his future.

“I looked at the world as a gloomy place that I shouldn’t be in,” Adrian said. “Coming to Youth Villages has changed that. Being here helped mend a lot of hurt, and changed my perspective about life a lot.”

Adrian said because of Youth Villages he knows he will be successful once he finishes his treatment. He now realizes he has a purpose in life, and he wants to finish high school at the performing arts school he previously attended.

He hopes that one day he can come back to Youth Villages and help other young people like himself.